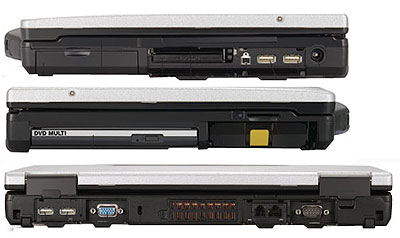 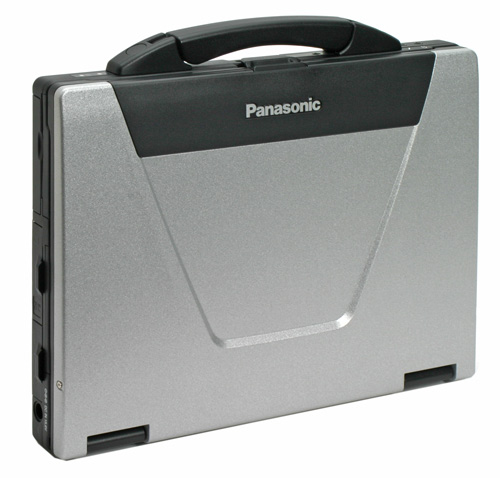 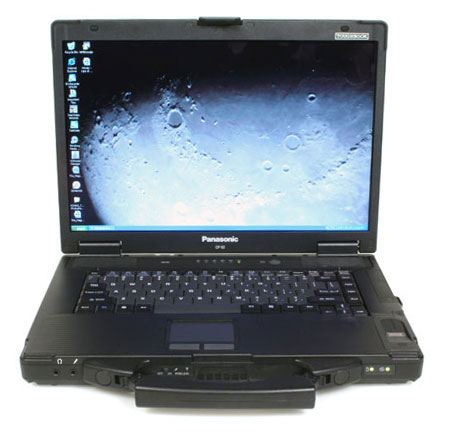 Panasonic's Toughbook laptop computers are designed to withstand rougher than normal treatment from their users. The full military specification models are often used by law enforcement agencies, armies, farmers, scientists and basically anyone who works in rough, wet or sandy environments. Panasonic's Toughbook CF-52 isn't quite up to the full military specification, but it is nevertheless capable of enduring accidental spills, knocks and drops at home, in the office or while on the road.

It has a hardened magnesium alloy case that's thick and broad and acts as a buffer between the internal physical connections and the ports along the edges. It means that if the notebook is dropped on its edge and is damaged, the entire motherboard probably won't need to be replaced. Because it has a carry handle it's a bulky unit, but it doesn't weigh an awful lot. In fact, at 3.3kg it's not overly heavy for a notebook with a 15.4in screen, and the handle makes it easy to carry it around like a briefcase — but there is no compartment for you to store your neck tie.

The 15.4in screen has a native resolution of 1280x800, so it doesn't have a large desktop area, but engineers and field technicians will appreciate the large physical size of the display. Its viewable angles are narrow, as the screen's contrast changes noticeably after approximately 150 degrees, and it's not designed to be viewed in bright outdoor areas. However, it is bright enough to use in a shaded outdoor area. Unlike fully ruggedised models, this one doesn't have a toughened screen — only a polarisation filter — so it can't be poked without being damaged.

Deep inside the Toughbook CF-52's case are a 2.26GHz Intel Core 2 Duo P8400 CPU, 1GB of DDR2 RAM, a 160GB hard drive and integrated Intel graphics. This is a basic configuration for running everyday office software, encoding media files, editing photos and conducting presentations. For presentations, you get a concealed D-Sub port.

In our tests, the Toughbook CF-52 was swifter by a few seconds than we expected; it recorded times of 1min 19sec and 1min 14sec in the Blender 3-D rendering and iTunes MP3 encoding tests, respectively. It will definitely do well when you put it under the gun, and it will also react quickly when multitasking. However, we do wish that it had 2GB of RAM instead of just 1GB.

For contractors out in the field who need to perform on-site diagnostics or programming of electrical devices (such as alarm systems), the notebook ships with a serial port, and like all the other major ports on the unit it's concealed. This is just one example of how the Toughbook CF-52 can be used in the field, but it's a machine that is also targeted at sales people who are always on the go and need something that can withstand the rigours of frequent travelling. It's not the best choice for farmers or for workers who need something to use in a dusty workshop, because the unit has vents and dust will eventually accumulate in these areas after long periods of time.

The port covers aren't waterproof, and there are open slots and vents around the edges, so the unit can't be used in and around water. It can be used outdoors and it will survive rain showers, as long as you get out of them quickly enough. Moreover, the Toughbook CF-52 will handle accidental liquid spills; we spilt a quarter of a 600ml bottle of water on the keyboard. We shook the water off over the bottom-right corner of the chassis (the left side has open microphone and headphone ports). The water also dripped out of a hole on the bottom of the chassis. We did this while the notebook was switched on, and it continued working.

The unit is also designed to absorb accidental bumps and vibrations. We dropped it off a desk onto carpet while it was switched on and the lid was halfway open; it tumbled and landed on a corner, but continued to function. We also walked around, carrying it by its handle while the screen was open, and banged the edge of the screen purposefully into various chairs, tables and walls throughout the office. The unit didn't sustain any damage, but the bumps did shake out more water that was trapped under the keyboard from the previous test.

It's worth noting that the Toughbook CF-52 won't take a heavy battering without the risk of being damaged; it's designed to cope only with accidental bumps and drops (from no higher than 76cm) so it shouldn't be treated with contempt.

The unit doesn't lack much when it comes to connectivity. You get the afore-mentioned D-Sub and serial ports, but there are also concealed USB 2.0 ports (four of them), and FireWire, Gigabit Ethernet and 56Kbps modem ports. There is an SD card slot, as well as PC Card and ExpressCard/54 slots, so it's well equipped for expansion. It also has a docking port facility.

The notebook's keyboard is very comfortable use, as the keys produce soft yet responsive bounce-back, but the delete key is at the bottom of the board instead of in the top-right corner, which is where we're used to seeing it. Heat isn't an issue with the Toughbook CF-52, even after running for an entire day, and it has loud speakers compared to many other notebooks on the market.

During our DVD rundown test the unit lasted 4hr 23min, which is a phenomenal result for a 15.4in model. However, the DVD burner did vibrate noticeably while spinning DVDs, which we found odd for an otherwise sturdy notebook.

The hard drive is installed in an anti-shock case relatively deep inside the notebook's chassis compared to a regular laptop. It's a conventional spinning hard drive (5400rpm) and Panasonic says there are no advantages to installing a solid-state device at this stage, as there are no speed or power benefits and because the shock resistance it has employed is robust.

For demanding users who tend to miss their mouth while they sip, or for people who are always using their notebooks on the road, the semi-rugged Toughbook CF-52 is worthy proposition. But don't buy it thinking that it will withstand everything you throw at it (or survive when you throw it, for that matter).